We Admit: We Love Laida Magtalas


8 replies to this topic

Got this from PEx

We Admit: We Love Laida Magtalas

This year’s Black Saturday turned out to be one of the more memorable ones in recent years as it played host to the opening of a real box-office treat, It Takes A Man And A Woman. The film, top-billed by Sarah Geronimo and an actor we know fondly as Lloydie, is the follow-up to 2008’s A Very Special Love and 2009’s You Changed My Life. Having breached the P200-million mark just a week after release, the film is on pace to break the Ai Ai delas Alas and Vice Ganda MMFF comedy film, Sisterakas’, record-setting P340-million takilya.

Being the closer, It Takes A Man And A Woman is the quintessential Dark Knight Rises of this Miggy Montenegro-Laida Magtalas trilogy. Except, well, there are no sore throat-addled superheroes here.

What we do have is a funny and authentic Pinoy rom-com that makes effective use of its leads’ strengths. As always, Laida’s childlike charms, the awkward moments she routinely finds herself in, and the natural flow of emotions Sarah brings to the character are endearing. Miggy Montenegro, the ambition-filled hotshot, is textbook JLC, behaving in all the right ways to make most every girl in the cinema fawn.

And that is where we’ll leave that because we aren’t about to dissect JLC’s ways. We’re here to talk about Laida, and the few reasons why, over the course of three movies, she’s become a favorite around here.

1) She gives out power hugs
FPJ was known for his vicious cyclone of fists to the midsection punctuated by the ever-trusty pompiang to the head. Laida, on the other hand, immortalized the cheesy way of “charging up” for a huge embrace that has the capacity to recharge any man after a long day at work. Note that the act of giving a power hug should be left entirely to women; it’s not a good look for guys.

2) She’s cute when she panics
Laida works in the magazine industry where the deadlines constantly hang like a guillotine waiting to fall. Safe to say, Laida, especially at first, doesn’t give off the feeling that she can handle it. She seemed determined enough but also, well, fragile. So whenever we saw her scrambling to make a project work, we couldn’t help but go “Op, iiyak na yaaan.” Just kidding, of course we rooted for her!

3) She’s a career woman who still has…a soul
Eventually she makes it big at some fancy publishing house in New York. When she returns to Flippage—the fictional publishing house the Montenegros own—she’s gotten big enough to somehow broker a deal between her original company and the New York publishers. Who knew that this girl—who used to be known for doing a “sun dance” to prevent the rain from falling during a shoot—would become that huge of an asset?

Given she becomes a semi-***** early into her comeback (blame John Lloyd and Isabelle Daza, the new girlfriend in the film), but as the story unfolds, it's revealed that Laida's still the perky girl she'd always been.

4) She’s never been kissed.
In a movie such as this, the chances of people kissing each other are pretty high. Especially when you're the lead character. But would you believe that Laida and Miggy never really touch lips in the entire thing? It came close a few times, but not really. This gives rise to the all-important question: Has real-life Laida ever been kissed in person? We'll leave that to the folks at showbiz sites! All we know is the N.B.K. bunch is a rare dying breed, which makes Laida even more special!

5) She has a “Version 2.0”
[CROUCHING-TIGER-DISAPPEARING-SPOILER](SPOILER ALERT!) Like any lover spurned, Laida saw to it that she made tremendous changes in her personality after that whole cheating episode by Miggy. This is where we saw that this sweet Belle of a woman can be feisty too when push comes to shove. And as the late, great Romy Diaz once said, "Yan ang gusto ko sa babae...lumalaban!"[/CROUCHING-TIGER-DISAPPEARING-SPOILER]

6) And finally, Laida sings her own damned theme songs
This was how Sharon did it before. She acted, and she sang her own theme songs. Sarah did just that, fulfilling both duties effectively, and proving just just how far this former Celine Dion mimic has come. 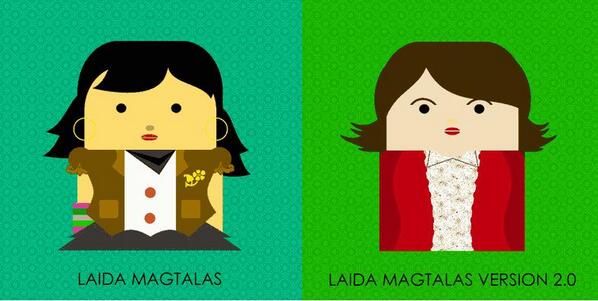 Wish You More B-Day's to come

nice. thanks for sharing

i love you laida!

oh we love her too. noon at ngayon. pati na ng in between.

Back to It Takes A Man And A Woman