thank you sooooo much agent outrigger for the beautiful pics.

can't wait for sam and sarah's project together 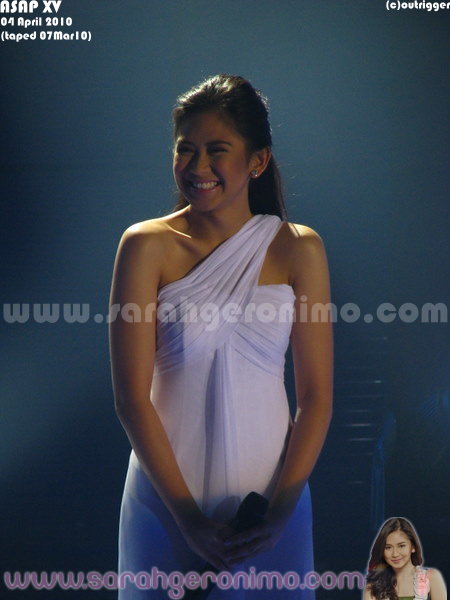 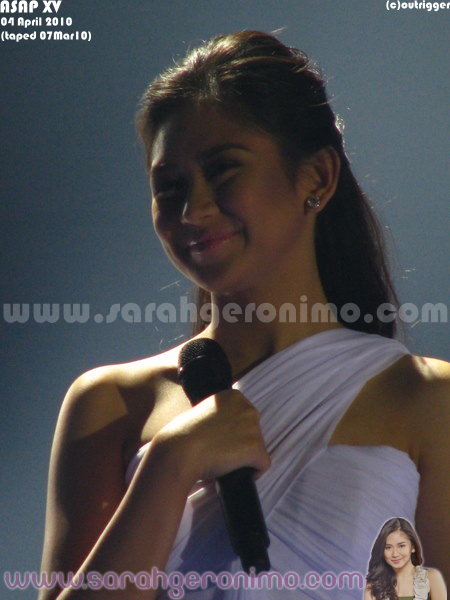 I'm browsing the net and accidentally came across with this site:
AskMen.com Top 99 Women 2010 Edition

Kindly ignore this if ever someone already post it and put it on the right place cause I really don't know where to post it. Thanks!

Why Is She Famous?

Sarah Geronimo is a successful singer and actress in her native Philippines. Since winning top honors at the Asia-wide singing competition Star for a Night in 2003, she has released the platinum-selling albums Popstar: A Dream Come True (2003), Sweet Sixteen (2004), Becoming, (2006) and Taking Flight (2007). She has also appeared in TV series such as Sarah, The Teen Princess, Bituing Walang Ningning (Lackluster Star) and Pangarap Na Bituin, as well as in films such as Filipinas, Captain Barbell and Lastikman.
Editors' Rating: 74


Sexiness
67
Unlike most American or European songbirds, Sarah Geronimo keeps her sexuality very much under wraps, preferring to promote a squeaky clean image that appeals to very young fans and likely wouldn't offend any elderly folks. Her record sales in the Philippines haven't suffered as a result, but if she ever hopes to seriously take on the mainstream U.S. or other Western markets, a sexy makeover might be considered.


Success
81
Sarah Geronimo had a very early taste of celebrity, starting out as a cast member of Pen pen de Sarapen on Filipino television at the age of 3 before appearing on a number of other kid's shows. While her acting career seems to have taken a bit of a backseat to her recording career, she does make the occasional big screen appearance, and has also been featured in the teen-oriented television series Sarah: The Teen Princess as well as the popular prime-time soaps Bituing Walang Ningning (Lackluster Star) and Pangarap Na Bituin.

Sarah Geronimo's greatest claim to fame is her No. 1 placing on the Star for a Night program, the Asian version of American Idol. Her win secured her a contract with Viva Records in 2003, and she has scored a handful of platinum-selling albums as well as nearly 20 Top 10 hit records in her native country since. Her half dozen or so chart-topping singles to date have logged more than two years overall at No. 1, including "Forever's Not Enough" (32 weeks) and "Ikaw" (36 weeks).

For someone so young, Sarah Geronimo has won an outstanding number of awards. Some of those accolades include Star Girl 2003, Outstanding Female Role Youth Model in the Field of Entertainer, Outstanding Manilans Award 2004, Gawad America's Female Entertainer of the Year for 2005, and Box-Office Entertainment Awards' Female Recording Artist of the Year for 2005 and 2006. She also received two ASAP Pop Viewer's Choice Awards in 2006 for Best TV Character and Best TV Theme Song (Bitiung Walang Ningning), and she won the prize again in 2007 as Female Performer of the Year. That same year, she earned Anak TV Seal's Most Admired Female TV Personality, Yes Magazine's Female Hitmaker of the Year as well as Starmometer's Female Artist Of The Year.

Sarah Asher Tua Geronimo was born on July 25, 1988, in Quezon City, Philippines. Her professional performing career began at the age of 3 when she joined the cast of Pen pen de Sarapen, a popular children's program. As a child, she also appeared on shows such as For Kids Only, Hiraya Manawari, Ang TV, and NEXT. In 1995, she was one of the performers chosen to sing for Pope John Paul II when he visited her homeland.
sarah geronimo wins star for a night
While she experienced her first taste of fame as a child actress, it would be her singing voice that would establish Sarah Geronimo as a major sensation. Her father enrolled her at the Center For Pop Music when she was 6, and her years of honing her vocal abilities finally paid off on March 1, 2003, when, at the age of 14, she beat out 10 other finalists in the Asia-wide singing competition Star For A Night. Her voice earned her the cash prize of a million Philippine pesos, as well as a 10-year recording deal with Viva Records.

Sarah Geronimo's debut release Popstar: A Dream Come True was released in September of that year. The track "To Love You More" topped the singles charts for almost four months, which helped propel the album to sextuple platinum status in the Philippines. Her acting career also kept her in the spotlight, with supporting roles in movies such as Captain Barbell, Filipinas and Annie B., as well as parts on a number of TV shows.

In 2004, the teenaged sensation landed a starring role in the drama series Sarah: The Teen Princess and also became a regular on the weekly variety show ASAP. She landed her first lead film role in Lastikman opposite singer Mark Bautista as well. Her sophomore album Sweet Sixteen was issued that November, and went on to achieve double-platinum sales status in the Philippines. That collection included long-running No. 1 hits such as "Forever's Not Enough" and "How Could You Say You Love Me." She also appeared in concert in the U.S. that year as part of the Night of the Champions tour.

In 2005, Sarah Geronimo recorded the theme song for the film Can This Be Love, which quickly became a gold record. She also joined the cast of the teen series SCQ Reload: OK Ako as Hero Angeles' love interest, and returned to the U.S. that year as part of the Pinoy Idols: Return Of The Champions tour. Viva Records issued Sarah Geronimo's first live concert disc The Other Side: Live Album in 2005, while her third studio album Becoming (2006) produced the mega-hits "I Still Believe In Loving You" and "Carry My Love."
sarah geronimo cast on lackluster star
2006 also marked Sarah Geronimo's debut on the popular nighttime soap Bituing Walang Ningning (Lackluster Star), for which she recorded the gold-selling soundtrack album. She embarked on her first solo American tour, The Other Side US Tour, which included shows in Alaska and Hawaii and also appearances in Canada, Taiwan and Dubai. Her 2007 international concert tour included stops in Australia, Canada, Europe, and UAE, in addition to the U.S., as part of her highly successful In Motion tour.

Sarah Geronimo hosted Little Big Superstar, a talent contest for children, and also landed a lead role in the drama series Pangarap Na Bituin in 2007. Taking Flight, her fourth studio album, was released that year, and contained the chart-topping singles "I'll Be Alright" and "Ikaw," which spent an incredible 36 weeks at No. 1. The DVD of her In Motion Tour was issued in early 2008.